Previous Page 3 of 7. Next Go back to the homepage. 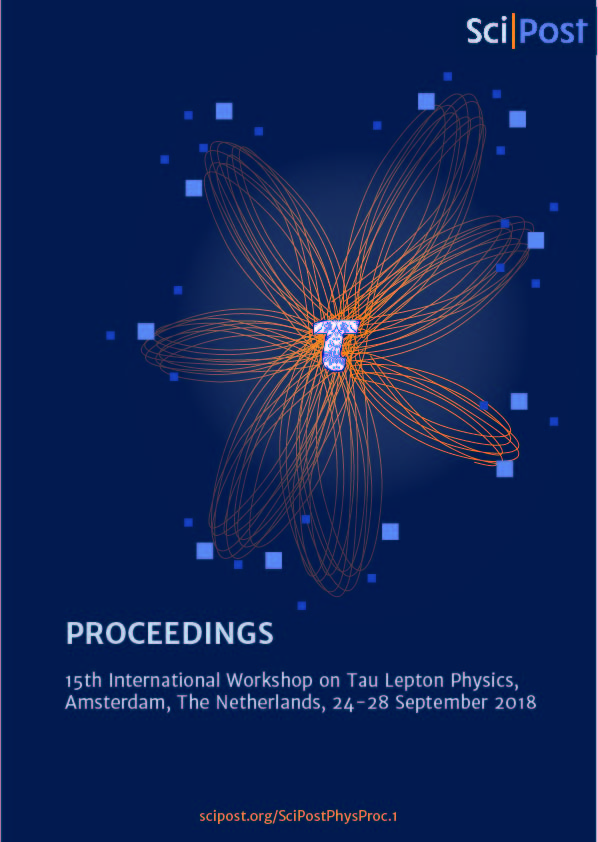 This month we have published the first volume of SciPost Physics Proceedings. The conference covered in this issue is the The 15th International Workshop on Tau Lepton Physics (Amsterdam, 24-28 September 2018).

This is the fifteenth workshop of TAU series on physics of the tau lepton, its neutrino, and related processes. The goal of the workshop was to get theorists and experimentalists together to discuss recent progress in the field. New results from high energy machines (e.g LHC experiments: ATLAS, CMS, LHCb), low energy machines (BES-III and other) and B-factories (including Belle-2) will be presented as well as recent results from g-2 and neutrino oscillation experiments. The program also includes related subjects such as hadron cross section measurement at e+e- colliders, lepton universality puzzles in meson decays, searches for Lepton Flavour Violation in τ and μ decays and review talks on the future experiments.

The refereeing of resulting proceedings volume has been managed by our guest fellows Dr. Marcus Matthias Morgenstern and Prof. Olga Igonkina. It contains 53 articles covering topics related to the tau lepton, neutrino and the related processes and possible experiments to detect them.

"Electrical detection of the Majorana fusion rule for chiral edge vortices in a topological superconductor" by C. W. J. Beenakker, A. Grabsch and Y. Herasymenko has received the Select label. Warm congratulations to the authors!

This publication presents a highly novel approach to tackle the demonstration of non-Abelian fusion rules of Majorana zero-modes, which can open a new line of research in the field of Majorana zero-modes. Building on recent research, the authors study how the injection at the edge vortices in systems with chiral Majorana edges affect the non-local fermion parity, and are able to observe this behaviour in electrical measurements.The proposed experiments can be applied to hybrid topological insulator/superconductor systems, and can be an important next step in the rapidly developing field of topological superconductors. 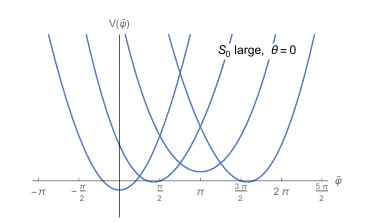 This paper deals with the question regarding deformations of trivial gapped phases within Quantum Field Theory. In fact, it gives an interesting demonstration of the fact that even simple bosonic systems can have anomalies of discrete symmetries. The existence of anomalies implies that the theory cannot be completely disordered with a trivial gapped phase without topological order. The authors specifically connect these results with possible strong coupling regions. Finally, the authors discuss the important implications regarding whether the symmetries can be disordered or not. The models they discuss also are relevant to condensed matter systems.

These resources will be entirely dedicated to furthering SciPost's mission to transform scientific publishing by providing a Genuine Open Access solution to researchers worldwide. Our operations naturally align with and fulfil the requirements of the ambitions formulated in Plan S from cOAlition S.

Many Austrian researchers have already adopted and contributed to the SciPost platform, and we hope that this mark of recognition from this consortium will encourage many more to join in and further fuel our expanding operations.

In this very well written paper, the authors provide a comprehensive study of the phase diagram of the dimerized spin-1 XXZ chain with single-ion anisotropy. In addition, the authors were able to validate their results by an extensive field-theory analysis as well as DMRG, which ensures a quantitatively correct phase diagram. Overall, this paper will not only be important as a theoretical contribution for theoretical quantum physics, but also for experimental studies concerning spin chain compounds.

This innovative paper shows a new way of studying bound states in atom-atom scattering, and gives an exact demonstrator on how to measure very narrow Feshbach resonances. Although the authors used cesium in their demonstrator, other atoms with complex and overlapping Feshbach spectra like dipolar lanthanides could also benefit from this study. In general, these results provide a powerful tool to identify and characterise narrow scattering resonances. Therefore, this research has the potential to improve the accuracy of coupled-channels calculations of molecular potentials, may lead to new ways for the field of spectroscopy, and can ultimately give a new impulse to the study of interacting quantum matter.

This theoretical high energy physics paper studies the slow Renormalization Group (RG) evolution using a 2D Potts model with Q > 4. First, the authors define new complex Conformal Field Theories (CFTs). Then, these new CFTs are used to develop a conformal perturbation approach that describe slow real coupling trajectories in the vicinity of these complex CFTs. The Potts model was used to develop these CFTs because, apart from its own significance, it serves as an ideal playground for testing this very general relation. Here, one will find a thorough discussion of all conceptual issues related to the topic, and the theories developed can be further used as a smoking gun for detecting walking in Monte Carlo simulations.

SciPost: a "marvelous initiative" according to Robert-Jan Smits


On 1st of November, the KNAW organized a meeting on Plan S for making Open Access a reality by 2020. At this meeting, Robert-Jan Smits, the driving force behind this plan, gave an enlightening presentation in which he singled out and strongly endorsed SciPost (from 2:00 on), calling it a "marvelous initiative".

Interestingly, he suggested that "Rhodium" was a more appropriate descriptor for SciPost than Platinum or Diamond. In his words, Rhodium is a "precious metal, which is rock solid, highly reflective, and can resist corrosion" and fits SciPost, "which deserves a classification of its own", better.

SciPost is very grateful for this greatly encouraging recognition, and will redouble its efforts in implementing the transition to Open Access by realizing its vision for the future: Plan SciPost.

SciPost is extremely pleased to have received a substantial donation of over 30k€ from a private donor. The timing of this generous gift could not have been better chosen: our activities are currently scaling up and we need to expand, but are still very busy trying to gather sufficient institutional support. With this gust of wind in our sails, we can accelerate the implementation of a number of projects and improvements to the portal. The SciPost Foundation expresses its warmest thanks to this benefactor for this subsidy, the second-largest we have received until now.

When monitoring quantum observables with continuous spectrum, the internal system evolution can compete with the measurement process. This competition induces a peculiar stochastic dynamics of the systems states which needs to be deciphered. In this well written and didactic paper, the authors rigorously formulate this challenging problem and study strong measurement limits. The analysis developed in this paper is expected to motivate further mathematical work based on the author’s approach, and a discussion can be started in the field.

Previous Page 3 of 7. Next Go back to the homepage.