Statistics of correlations across the many-body localization transition

This is not the current version.

Ergodic quantum many-body systems satisfy the eigenstate thermalization hypothesis (ETH). However, strong disorder can destroy ergodicity through many-body localization (MBL) -- at least in one dimensional systems -- leading to a clear signal of the MBL transition in the probability distributions of energy eigenstate expectation values of local operators. For a paradigmatic model of MBL, namely the random-field Heisenberg spin chain, we consider the full probability distribution of \emph{eigenstate correlation functions} across the entire phase diagram. We find gaussian distributions at weak disorder, as predicted by pure ETH. At intermediate disorder -- in the thermal phase -- we find further evidence for \emph{anomalous thermalization} in the form of heavy tails of the distributions. In the MBL phase, we observe peculiar features of the correlator distributions: a strong asymmetry in $S_i^z S_{i+r}^z$ correlators skewed towards negative values; and a multimodal distribution for spin-flip correlators. A \emph{quantitative quasi-degenerate perturbation theory} calculation of these correlators yields a surprising \emph{agreement of the full distribution} with the exact results, revealing, in particular, the origin of the multiple peaks in the spin-flip correlator distribution as arising from the resonant and off-resonant admixture of spin configurations. The distribution of the $S_i^zS_{i+r}^z$ correlator exhibits striking differences between the MBL and Anderson insulator cases.

You are currently on this page

Reports on this Submission

1 - the significance of results as a characterizing feature of MBL phase is not clear, considered distributions seem to be strongly dependent on details of system
2 - it is not clear whether the obtained results provide any new insights into many-body localization transition mentioned in the title of the work

This paper presents an analysis of distributions of all non-vanishing two-point correlators in eigenstates of disordered XXZ spin chain regarded as the paradigmatic model of ETH-MBL transition. The authors employ state-of-the-art exact numerical methods to find distributions of the correlators and use a mixed degenerate and non-degenerate perturbation theory to reproduce those distributions (semi-)analytically. The obtained numerical results are compatible with well known results of Refs. [19,35,49] whereas the use of perturbation theory in the context of correlation functions of disordered lattice system is interesting and yields very good agreement with numerics at large disorder strength $W,$ providing insight into origin of various features of distributions of correlators.

While the analysis conducted by the authors is thorough, the significance of the results obtained in this paper is not obvious. The importance of gaussian shape of distributions of the correlators is clear in the ergodic regime, the same applies for the appearance of the heavy tails at stronger disorder and their impact on thermalization. This problems have been, however, widely discussed in Refs. [35,49] and the present paper with its study of different, longer-range correlations has little to offer in that respect. The authors argue in the Introduction that the considered correlators are equally suited to characterize the MBL phase. However, it is hard to be convinced by this statement: while the properties of distributions of the correlators in the ergodic phase are generic features of thermalizing interacting quantum many-body systems, the same distributions in the MBL phase seem to be strongly dependent on the details of the considered system and would change upon some deformations of the system such as inclusion of a next-to-nearest coupling term or change of disorder distribution. Thus, it is not clear to what extent the considered distributions of correlators may be regarded as a characteristic features of the $\textit{MBL phase}$ (in broader, model independent context) and, going further, it is not evident whether we learn anything new about the many-body localization transition from the results of the present paper. Perhaps, some insights from the strong disorder perturbation theory suggest some model independent features of the considered distributions that could be related to the structure of local integrals of motions which are believed to be the robust way of describing the MBL phase?

Having said that, I believe that the present paper may merit publication in some form. Pondering the above comments could improve the significance of the manuscript. In addition, I have a number of minor questions and remarks listed below.

1 - Strong fluctuations in eigenstate properties leading to heavy tails in the considered correlator distributions at $1.2<W<3.7$ were shown in Ref. [49] to coincide with the region of the phase diagram dominated by Griffiths regions. Are there any new insights on that matter from considering correlators of bigger range r>1?
2 - Does the system size dependence of the standard deviation of distributions shown in Fig. 3 change when r>1?
3 - Can a finite size scaling of the points of maximal departure from gaussianity (shown in Fig. 4) be performed? Does the point seem to be tending to $W_C=3.7$ or rather staying in the ergodic phase?
4 - In Section 3. C. the authors write that "it is natural to treat the interaction of the Hamiltonian" as a perturbation. From what follows (eq. A1 and A2) it is clear that it is the kinetic term (in the fermionic language) that is treated as the perturbation.
5 - Perturbation theory results shown in Fig. 6 are shown only for the $r=1$ case. I understand that for $r>1$, the perturbation theory shows that there are no "satellite peaks" in $\langle F_{i,i+r}\rangle$. Is it possible to reproduce distributions of $\langle F_{i,i+r}\rangle$ for $r>1$ within the considered perturbation theory?
6 - It is not clear what is happening close to $0$ of the histograms in Fig. 6, adding an inset could make this matter clearer. The region $|x|<1/(4W)$ hosts the broadened broadened delta function so that the numerical results are bigger than $1$ in contrast to the "PT" result which vanishes in that region except for the $x=0$ point, thus showing a discrepancy between "PT" of the considered order and "ED".
7 - The vanishing positive part of the distribution of $\langle S^z_i S^z_{i+1}\rangle_c$ differentiates between Anderson localized phase and MBL phase. Is it possible to find some experimentally relevant consequences of that fact (as the highly excited eigenstates of interacting many-body systems are not accessible in experiments)?
8 - References are quite appropriately chosen, however work M. Serbyn et. al. Phys. Rev. B 96, 104201 (2017) seems to be related as it studies properties of diagonal matrix elements in the same model. Also, the approach of recent paper A. Maksymov et. al. Phys. Rev. B 99, 224202 (2019) seems to be related to the present work.
9 - The authors restrict themselves to analysis of correlators in mid-spectrum eigenstates. While the analysis of Ref. [21] suggests that properties of the system change in very similar way when increasing/decreasing energy density, results [62] indicate large difference between time dynamics at small and large energy densities. Would effects of change of energy window be non-trivial on the considered distributions of correlators?
10 - P. W. Anderson's paper is doubly referenced as [11] and [50]

First of all, we thank the referee for a careful reading of our paper and a detailed commentary. Below, we answer the various questions put by the referee and outline the main resulting changes we have made to the paper in the version 3.

Before that, we offer our own perspective on the broader points raised in the report. In particular, the referee comments that ``the significance of the results obtained in this paper is not obvious", remarking that the significance of the ergodic phase results have been discussed elsewhere while the MBL phase results, which are new, are perhaps non-universal in the sense that the form of the correlation functions may be model dependent. Moreover, the report questions whether we have anything to say about the MBL transition itself.

As mentioned by the referee we have provided comprehensive calculations and an analysis of all non-trivial two-point correlation functions across the phase diagram of the disordered XXZ spin chain - this includes the ergodic phase, the incipient sub-diffusive regime and the many-body localized phase. In other words, we have focused on the features of the phases themselves and do not claim to provide new information about the transition. To highlight this point we have decided to change the title from "Statistics of correlations across the many-body localization transition" to "Statistics of correlation functions in the random Heisenberg chain".

On the interesting question of the model-independent features of the correlation function distributions in the MBL phase we have a few points to make. (i) First of all, we want to re-emphasise the paradigmatic nature of the model considered in our paper to the study of MBL. Even neglecting the question of characterizing the MBL phase, given the importance rightfully attached to this model, we consider it worthwhile to characterize and understand the natural observables including the 2-point correlation functions. (ii) The detailed form of the two-point correlation functions explored in our work is model dependent in the sense that perturbations or changes to the disorder distribution may modify the distributions. For example, the satellite peaks in the spin-flip correlation functions may be smeared out by further-neighbour couplings. (iii) However, there are features of the correlation function that should be present in any MBL phase. MBL will always ensure that correlation function distributions for fixed distance are broad and relatively insensitive to the system size - a sign of the violation of ETH. Since there is a localization length that is disorder dependent, the variance of the distributions will fall off with increasing disorder strength (as shown in Fig. 3). One of the central observations of our paper is that the mixed degenerate and non-degenerate perturbation theory can capture the detailed form of the distributions and, in particular, this can capture the all-important resonances that ultimately destroy MBL for sufficiently weak disorder. The appearance of such resonances is universal to MBL and appear clearly in the outmost peaks of the correlator distributions.

Tying these features of the correlation functions to the local integrals of motion is an interesting avenue for future work. By now the changes requested by the referee are included in the latest version. Next the specific questions asked in the report are answered ( the list of changes is included in the re-submission comments ) :

1) This is a very interesting point. There is no obvious relation to transport in correlations with $r>1$, hence it is not clear how these correlators could be affected by Griffiths regions.
3) We attach a plot of the maximum kurtosis scaling with system size. Only three points are suitable for fitting and possible extrapolation. We think that a finite scaling is not really meaningful with the data we have. 4) The referee is correct. The kinetic term is the one treated as a perturbation. We thank the referee for pointing out this error and have corrected it in the version 3. 5) Distances $r>1$ require higher order perturbation theory because the leading and subleading orders are non-trivial only for $r=1$. Unfortunately, our semianalytical approach becomes numerically very expensive when applied to higher order perturbation theory. 7) Certainly it is very challenging to detect this difference in experiments. At the time being we have not focused on the dynamical consequences of this observation, but this is clearly an important and interesting avenue for future research. 9) This is a good point. We don't expect non-trivial effects (beyond the energy dependence of the mean in the ETH phase) arising from a change of energy density as long as the mobility edge is not crossed. 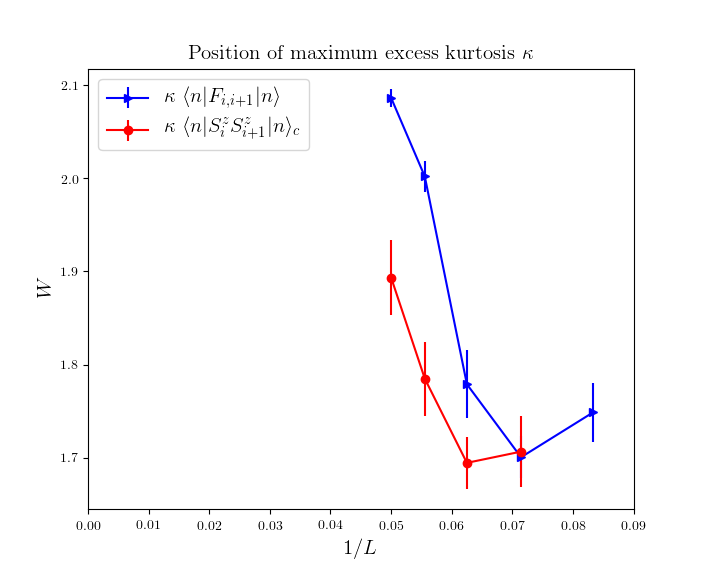